Burle Marx (1909 – 1994) was a famous landscaper and is well-known as for the green public areas and private gardens that he had designed in Brazil’s new capital during and after the construction period. Among others, may be mentioned the Praca dos Cristais (SMU), the gardens of the model quadra 308 SUL, the covered garden of the Palácio de Itamaraty (roof terrace), the Eixo Monumental, the Palácio de Justica, Teatro Nacional Claudio Santoro (internal and external gardens) and other front-building green areas of  public buildings, but also f.e. the garden of the German Embassy. 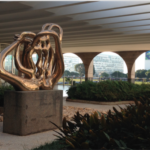 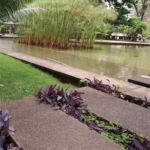 At the age of 19, during a stay in Germany for illness-recover-purposes, Burle Marx got in touch with the art works of Picasso, Matisse, Klee and van Gogh, which inspired him to study art. Consequently, upon his return to Rio de Janeiro, and encouraged by his friend Lucio Costa, he started at the National School of Fine Arts, where he also met with Oscar Niemeyer, Hélio Uchoa and Milton Roberto.

His first garden project was the Casa Forte Plaza in Recife in 1934. The following year, while he was planning Euclides de Cunha Plaza, also in the capital of Pernambuco State, he resolved to leave behind European influences and decorated the space with plants from the caatinga and from the northeastern backlands.

It was upon the request of Lucio Costa, that Burle Marx came to Brasília, and became member of the team. With his project “Praca dos Cristais” / SMU he decided to combine the plantation of native plants from the Cerrado with other (exotic) plants and to point out the existence / importance of crystals to be found in the Cerrado. 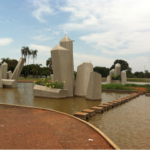 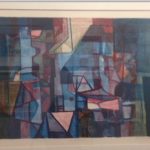