The story of this space begins in 1974, when sheds, that housed the headquarters of the extinct Fundacao Cultural do Distrito Federal, become the Teatro Galpao. The first play staged here was „O homem que Enganou o Diabo e ainda Pedia Troco“, by journalist Luiz Gutemberg under direction of Lais Aderne. A success of public and critic.

In 1975, diplomat Wladimir Murtinho, by that time head of Secretaria de Educacao e Cultura, was enthusiastic about the possibilities of the space, which in 1977 was remodelled and renamed Centro de Criatividade. This included, besides the Galpao Theater, the Galpaozinho and the art galleries. It became a meeting point of the artists of the city.

Under the name of Espaco Cultural 508 Sul, the place underwent renovations and after four years having been closed , it was reopened in 1993 with a strong vocation for training in the arts. In 2003, as homage to the leader of the band Legiao Urbana, the place was renamed Espaco Cultural Renato Russo and further consolidated itself an essential part of the artistic and cultural formation of the youth of the Federal District.

Ten years later, in 2013, the space was closed once again, initially to make adjustments in electrical and hydraulic installations, fire fighting and accessibility.

In November 2016, without altering its characteristics, a new reform was initiated, preserving its tradition and its history. On top of that, the work recovered and modernized the internal spaces. 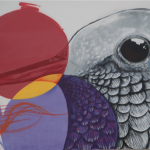