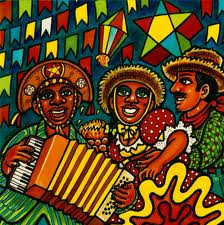 „Festas Juninas“ are folk ceremonies mainly held by the rural population (“caipiras”) in the interior of Northeastern Brazil during the month of June, in reverence of the three saints Santo Antonio, São João and São Pedro.

The roots of the commemorative days are European, from the colonial times, and were known as “Festa Joanina”. Brought to Brazil by the Portuguese, the event was renamed to “Festa Junina” and incorporated typical Brazilian customs with regard to music, dances, food and beverages. Beside carneval the “Festas Juninas” are the second most popular events in Brazil. The biggest festivals – attracting millions of visitors – take place in Caruaru (Pernambuco), Campina Grande (Paraíba) and Fortaleza (Ceará).

The cycle of „Festas Juninas“ officially starts on 12th of June – the night before Santo Antonio – as the Brazilian „Valentines Day“ („Dia dos Namorados“). Santo Antonio is known as the saint of the single girls finding a husband, – but also the saint of refinding lost objects. The night before São João (23rd / 24th of June) fire-places („fogueira“) and mystical ceremonies are meant to banish bad spirits – noisy pumps should frighten them and twigs of rosemary and tresses of garlic should avoid the malicious eye. São João apparently protects from the bad and protects friendship. The 29th of June, the last day of the ceremonies, is celebrated in the name of São Pedro, being the protector of the widows and fishermen. 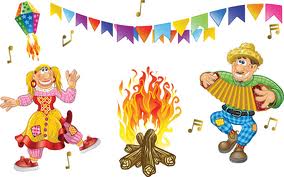 For the celebration ceremonies, streets, places and school yards are decorated with colourful girlandes („bandeirolas“) made of crepe paper („papel crepom“), and booths are built up to offer food and beverages („comes e bebes“).

Specifically food is the most characteristic of the „Festas Juninas“ where a lot of dishes are based on corn („milho“) following the indigenious herency to celebrate the period of the corn harvest: boiled corn, pop-corn, „canjica“, but also sweet rice, sweet potatoes, rosted almonds and „pê-de-moleque“, „rapadura“ are served. 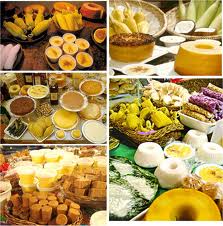 As the winter season starts and nights become a little chilly, hot drinks are prepared based on red wine or sugar-cane-brandy („cachaça“) and flavoured with spices like cinnamon and cloves (in Europe known as mulled claret, served in the cold season before Christmas).

Other characteristics are games like „pescaria“, „argolas“ and „tiro ao alvo“ as well as music and dances like „forro“, „boi-bumbá“, „tambor-de-crioulo“ and quadrilles. 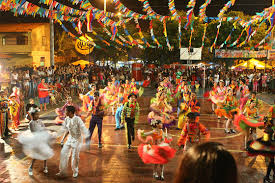 The most famous singer / composer of typical Northeastern country music also practiced during the „Festas Juninas“ – was Luiz Gonzago, born 1912 in Exu / Pernambuco, and known as the „King of Baiao“. His 100th anniversary was commemorated last year in the whole country.

Brazilians like to celebrate, to eat and to dance. Therefore it should not seem strange at all that the first „Festas Juninas“ in Brasilia already start from the 1st of May on (for example in 307 SUL and lasting until 13th of June) and last until end of July. To justify this expansion, the „Festa Junina“ simply turns to be a „Festa Julina“, – and the party goes on!

You’ll find a listing of “Festas Juninas” in/around Brasilia on: