Aug 7, 15 • Topics • Comments Off on Lei Maria da Penha – against violence towards women. 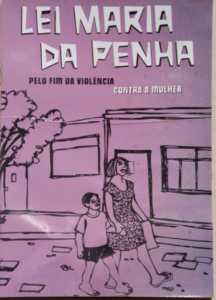 It was signed on August 7, 2006 by President Luiz Ignacio Lula da Silva. Since then, the Brazilian society and politics proved to have changed their mentality and view on the problem of violence against women which is not anymore a private issue but became a public matter. The Law „Maria da Penha“ has gained a huge popularity among Brazilians (about 98% of the population have knowledge about its existence / content).

By the United Nations, the Law „Maria da Penha“ is judged as one of the world’s 3 best legislations treating with violence against women. Its content had also been recognized by recommendation through the „Convention of Belém of Pará“ (Convencao Interamericana para Prevenir, Punir e Erradicar a Violência contra a Mulher) and the UN Convention of Elimination of all kinds of discrimination of the Woman (CEDAW), – both of which Brazil had under-signed.

Maria da Penha Maia Fernandes was a pharmacist from Ceará and had been treated with brutality by his husband Marco Antonio Heredia Viveiros during 6 years of marriage. In 1983, she almost lost her life by 2 attacks of her husband, the first of which made her paraplegic, and her story draw attention all over the world. Maria da Penha fighted for 20 years to bring her case to justice, and her husband to be punished; he finally stayed in prison only for 2 years.

As a symbolic reparation and recognition for this woman`s battle this law was given her name.

The case of Maria da Penha became the reason for the Interamerican Commission for Human rights of the OEA, in 2001, to prevail Brazil to create a legislation treating with this type of violence based on gender and causing death, injuries, physical, sexual or psychological suffer and moral or patrimonial damage.

Although it seems difficult to measure the real impact of this legislation in reducing domestic violence in Brazil during these first 9 years, its passage and formulation as an instrument of social, political, judicial and cultural change is deserving of notice. The Law „Maria da Penha“ shares the perspective that domestic violence is a violation of the human rights of women and stipulates a national, integrated set of public policies to eradicate this grave problem. In this sense, the provisions of the law include the adoption and enhancement of preventive, puntive, protective as well as assistance-related policies.