Great national artist Luiz Gonzaga do Nascimento was born in Exu, State of Pernambuco on December 13, 1912 and became a very prominent  Brazilian folk singer, songwriter, musician and poet. Born in the countryside of Northeastern Brazil, he is considered to be responsible for the promotion of northeastern music throughout the rest of the country. He is also known as the “king of baião” and “Gonzagão”. 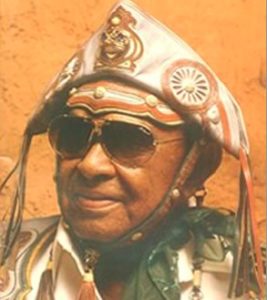 The son of a peasant and accordion player, Gonzaga was attracted to the 8-bass accordion at a very early age, but at that time he used to accompany his father by playing the zabumba (type of bass drum) and singing at parties and religious celebrations. He left home in 1930 to join the army, and toured Brazil with an army band until 1939. Gonzaga decided to remain in Rio de Janeiro with a recently purchased accordion. He used to perform in the streets and in bars, playing boleros, waltzes and tangos.

After noticing that the northeastern immigrants missed the music from their hometowns, he started to give listeners the sort of music they craved to hear: xaxados, baiões, chamegos and cocos.

The baião is a Northeast Brazilian rhythmic formula that became the basis of a wide range of music. Forró, côco, and embolada are clear examples. The main baião instrument is the zabumba, a flat, double-headed bass drum played with a mallet in one hand and stick in the other, each striking the opposite head of the drum.

Listen to Luiz Gonzaga playing and singing one of his most famous songs “O Xote das Meninas” (Zé Dantas) during a show in 1987. The RECORDING ends with an extract of his greatest hit “Asa Branca” (written with Humberto Teixeira) which was recorded in 1947 and covered countless times by many different artists.

Luiz Gonzaga is seen as a Brazilian hero; his 100-years-anniversary and his music are subject of a series of homages and festivals celebrated during the whole year of 2012 all over Brazil, but principally in the Northeast of the country, like in Porto Velho / Rondônia: 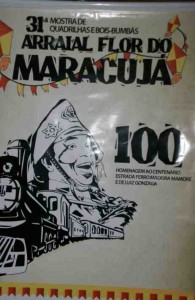