This monument in the shape of a pyramid (without spire, typical for the architecture of the Aztecs) is another famous work made of glass and concrete designed by Oscar Niemeyer. 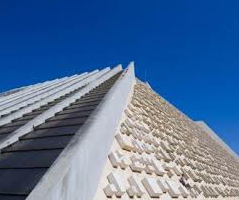 The white geometrical figures on the outside walls were designed by Athos Bulcão and represent his most monumental work.

In the entrance hall,  there is a green area, projected by Burle Marx, also showing two sculptures of Brazilian artists: 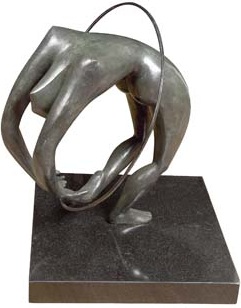 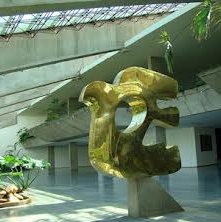 “The bird“ by Marianne Peretti

In the interior, the theater disposes of 3 halls, part of them being located under-ground:

The denomination of the theater is in honour of Cláudio Franco de Sá Santoro (1919 – 1989), who was a Brazilian composer. Santoro studied in Rio de Janeiro and in Paris with Nadia Boulanger. From 1939 on, he was a professor at the conservatory of Rio de Janeiro, teaching composition.

The theater was inaugurated on March 6, 1979, and became the base of the Orquestra Sinfônica do Teatro Nacional Claudio Santoro (OSTNCS). The orchestra was founded by Cláudio Santoro himself in March 1979 and is one of the most important ones in Brazil. Since then, the OSTNCS gave thousands of concerts, also abroad, accompanying famous national and international soloists, and recording repertoires of Brazilian music like „Sinfonias dos 500 anos“ and „Classicos do Samba“.

The orchestra is actually conducted by Claudio Cohen, a Brazilian violonist, with profound national and international experiences, and involved in music education and activities as general director of the Opera Festival of Brasília, member of the Quarteto de Brasília and the Academia Brasileira de Letras e Música and as professor of the Departamento de Música da UnB. As soloist and also as a member of  chamber orchestra, Cohen published 9 CD’s.

The OSTNCS is offering classic concerts in the Teatro Nacional every Tuesday at 8 p.m. which is a fantastic opportunity for the citizens of Brasília to assist classic music – free of charge.

Normally there is no need to show up early to get in, although these concerts are very popular. There is also no dress code, and the audience is coming directly from work, from the street and even bring their little children with them.

And this is the program for Tuesday, May 7: