Tiradentes and the Inconfidência Mineira

In the last quarter of the 18th century, Vila Rica de Nossa Senhora do Pilar do Ouro Preto was a dynamic place. Gold had brought great wealth to the city and this was translated into fine religious and secular buildings. Much of the artistry that went into these constructions and their decoration was home-grown, such as the genuis of O Aleijadinho. In conjunction with this flowering of the arts an intellectual society developed. And yet all this went on under the heavy hand of the Portuguese crown, which demanded its fifth share (the quinto), imposed punitive taxes and forbade local industries to operate. While the artists and artisans could not travel and had to seek inspiration in what was around them, the intellectuals were often from families who sent their young to Europe to further their education. So, when the gold yields began to decline and the Portuguese demands became even more exorbitant, some members of society began to look to Europe and North America for ways to free Minas Gerais from the crown.

One side of the argument was the view of the governor, the Visconde de Barbacena, who refused to admit that the mines were exhausted and that poverty was beginning to affect the community. As far as he was concerned, there was no gold because it was being smuggled out of the captaincy and there was no economic problem, just a large unpaid debt to the Portuguese crown. On the other side was the idea, as expressed by the French poet Parny, that Brazil was a paradise on earth, with everything except liberty. The Jesuit Antônio Vieira, who lived in the previous century, put it thus: „the cloud swells in Brazil and it rains on Portugal; the water is not picked up from the sea, but from the tears of the unfortunated and the sweat of the poor, and I do not know how their faith and constancy has lasted so long.“

In the late 1780s a group of people began to have secret discussions on how to resolve the intolerable situation. It included the poets Cláudio Manuel da Costa, Tomás Gonzaga and Ignacio de Alvarenga, the doctors Domingos Vidal Barbosa and José Alvares Maciel, Padres Toledo and Rolim and the military officers Domingos de Abreu Vieira, Francisco de Paula Freire de Andrade and José de Resende Costa. Into this group came Joaquim José da Silva Xavier, a junior officer, who was born at the Fazenda de Pombal near São João del Rei in about 1748. He was also a dentist and became known by the nickname Tiradentes – tooth-puller. Already dissatisfied with the way the army had treated him, by failing to promote him among other things, in 1788 he was suspended from active duty because of illness. The subsequent loss of pay roused him further. In trying to get reinstated he met Freire de Andreade and Alvares Maciel and later conversations prompted him to tell them of his idea of an uprising against the Portuguese. The Inconfidência grew out of these types of meeting, some planning action, others the future political and economic organization of a new, independent state. 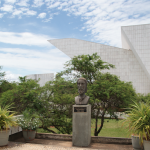 The conspirators worked to gain support for their cause, but one soldier they approached, Coronel Joaquim Silverio do Reis, used the information he had been given to betray the cause. The governor received reports from other sources and began to build up a picture of what was going on.

Tiradentes was the first to be arrested, at the beginning of May 1789, in Rio de Janeiro. It seems that the plotters at this time still had no clear idea of what their ultimate aim was, nor of the importance of their attitudes. They never got the chance anyway because all were arrested soon after Tiradentes. They were imprisoned and kept incommunicado for two years, while the case against them was prepared.

Tiradentes was singled out as the most important member of the group and, under questioning, he did not disabuse his captors, taking full responsibility for everything. A defence for the Inconfidentes was prepared, but it almost totally ignored Tiradentes, as if he were being made a scapegoat. It made no difference, though, because the defence lost; 11 Inconfidentes were sentenced to death in November 1791. Soon afterwards the authorities in Brazil read out a surprising letter from the queen, Dona Maria I, commuting the death sentence for 10 of the conspirators to exile in Portugal or Africa. The 11th, Tiradentes, was not spared. On 21 April 1792 he was hanged and his body was quartered and his head cut off, the parts to be displayed as warning against any similar attempts to undermine the crown. Even though Tiradentes would never have been freed, one of the astonishing things about the queen’s letter was that it was dated 18 months before it was brought to light.